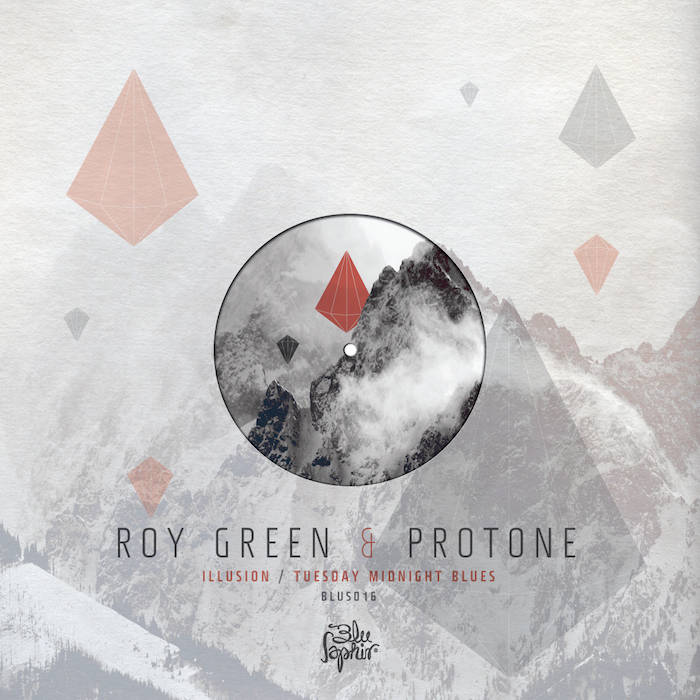 Be sure to give their Knowledge Mag guest mix a listen - www.beatsfortheplanet.com/2012/01/27/roy-green-protone-knowledge-magazine-guest-mix-26th-january-2012/

A: TUESDAY MIDNIGHT BLUES
B: ILLUSION

Rolling in with a variation of the infamous Shadowboxing break, multi-layered vocals ignite the flow of piano keys while esoteric soundscapes light up the horizon. A mighty crescendo drops Illusion into a pool of modulated, moving bass. As the break comes to pass, each instrument of the track reunites for a second time. Fans of Esoteric, Vampire UK, Darkestral, Influenza Media, Shogun, Exit, and Horizon should definitely give these two a go!

Swooned in by lightly modulated atmospheres, the journey begins as pads echo upon a pulsating, melodic ocean. An eerie underlay leads in the brief female vocal, while warmth engulfs the magical number. Squelched bass rushes in past the one- minute mark, while the vocal becomes looped and more drawn out.

Like the winter season, this piece of art is an endlessly evolving series of layers. Right when you believe Tuesday Midnight Blues is at its finest, another instrument gets thrown in. Absolutely brilliant start for Blu Saphir, Roy Green and Protone!